People move to Japan for many reasons, for all the right one. Therefore, we from Tokyo Room Finder will share with you many different reasons why our bloggers decided to live in Japan. For the first part of our series, let’s tune into the story of “The Second Greatest Photographer”

I moved to Japan in June of 2019 after spending 12 years in Shanghai, China. Being from the Northern Californian coast, Kyushu is a refreshing breath of fresh air for me. Literally. Except when the damn smog from China blows over the East China sea and infiltrates the clean surroundings…cough cough

*expectorates phlegm from the throat up to mouth*

“China?” people usually ask me, “Why China?” I don’t know. Adventure? A change of lifestyle? I like Chinese food? Even though I loved it, I’m still not 100% sure of the reasons for moving to China. But ask anyone about why they came or are about to go to Japan, and you’ll be sure to get a concrete answer:

One main reason why many people move to Japan is because of its exotic, yet relatively safe surroundings. It’s different and fun without being too unfamiliar and too chaotic. We all knew about sushi, sashimi, Shinjuku, the famous dancing Elvises (Elvi?) of Yoyogi Park, the abundant cosplay, etc before even setting foot on the land of the rising sun. Its culture has far-reaching appeal. How many other places can you say that of? Quick! Name the top five things Suriname offers! What about Belgium? Japan, on the other hand, is very well known worldwide.

Another thing that makes Japan so appealing is that it is a very safe country in comparison to many other places. Sure, there are the odd attacks on manga artists, plowing of shoppers in Akihabara or groping on the subway. As shocking and vile as they may be though, compare Japan with any other first world country and you’ll see how safe it is.

Tacky story, but I met my future wife while traveling to Vancouver. She was a Japanese student enrolled in a few college courses. Love at first sight, blah blah blah and we found ourselves in an online, long-distance relationship.

I moved to China shortly after meeting her and her back to Japan. I always thought of Japan of a unique, hip place but never really had a desire to visit or let alone move there. After spending time getting mugged in South Africa, struck by tropical cyclones in Fiji and puking my guts out in China, I craved more adventure, more challenges, more uncertainty, and Japan was not the place for that.

I only visited Japan because of my relationship. I soon convinced her to move to Shanghai and start a new adventure together there. We spent nine years navigating the struggles and fun but grew old quickly. The wear and tear of ungrounded drug tests of foreigners, random visa checks, haggling for all of life’s necessities and the pushing and shoving took its toll, and a more stable lifestyle suddenly started looking appealing.

We first tried Okinawa. “Wow, you can buy American cereal here?” “You guys have clean, unpolluted beaches?” “You can drink water from something other than a bottle?” “Oh, but you don’t like dogs in apartments… never mind.” Kyushu was next on the list since it’s the place the supportive in-laws reside in. “Wait, you have active, yet non-dangerous volcanoes here?” “Housing is cheaper than Shanghai?” “You have beaches too?” Why did I never think that Japan had beaches? It’s an island nation for god’s sake. It obviously has many beaches! As a matter of fact, Google reveals that Japan has almost 30,000 kilometers of coastline, more than double that of Greece which is renowned for its coast!

It has only been a couple of months, but I already feel my hairline un-receding, my skin feeling more baby-like and my anus a lot cleaner (thanks to the abundant bidets!). I did move to Japan because of the same reason everyone else did: It’s stable, clean, beautiful and delicious. Also, it’s an adventure without having an adventure.

That’s my story. What about yours? Tell us in the comments below, why Japan?

Thank you for reading this week’s blog! 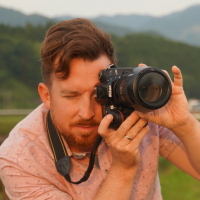 An American transplant dropped off in Fukuoka after documenting and photographing the street life in Shanghai for 12 years.